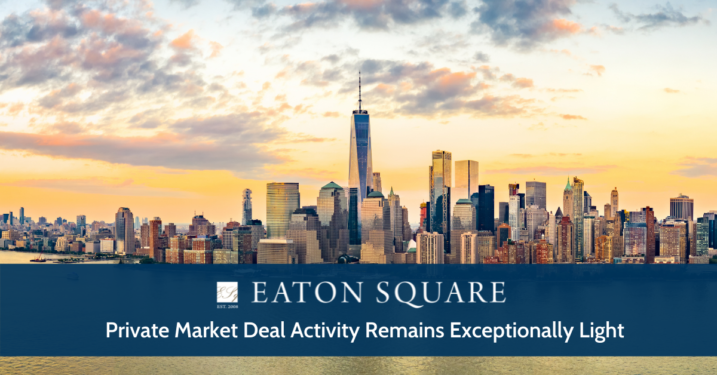 Stefan Shaffer, our New York Partner, shares the latest Private Capital Report for February 2020. Overall, deal flow was down 50%-70% during the first few weeks of the new year. But this is expected to likely pick up mid Q1 as the market returns to normal course and M&A activity resumes. Read the full report below.

February new deal activity remains exceptionally light as anecdotal estimates suggest that deal flow was down 50%-70% during the first few weeks of the new year. That will likely pick up mid Q1 as the market returns to normal course, M&A activity resumes, and more issuers look to complete recapitalizations prior to any capital gains legislation. The slow deal calendar, however, is having a rather profound impact on pricing and leverage metrics, especially for larger middle-market borrowers ($25+ million in LTM EBITDA). Specifically: (i) aggregate leverage of 6x-7x is increasingly likely for leverage buyouts when enterprise multiples are in the double digits (assuming there is a minimum of 40% of new cash equity going into the deal), and (ii) pricing has contracted between 50-75 basis points for capital provided by non-bank direct lenders, unitranche providers, and mezzanine lenders. For lower middle market issuers ($5-$15 million in LTM EBITDA), liquidity conditions are virtually identical to year-end 2021 and remain seemingly unaffected by the Fed’s recent more hawkish position on bond purchase tapering and anticipated 2022 interest rate hikes.

These are strange days for the private capital markets.

Inflation concerns and fears of a tighter Fed monetary policy dominate the macroeconomic commentary, and consequently, the publicly traded markets have been under pressure since the beginning of the year. However, contrary to conventional wisdom, liquidity conditions in the private market have improved, especially for larger middle market issuers. Specifically, for issuers with LTM EBITDA greater than $25 million, we are loosening our leverage multiple indications for February by over one full turn and lowering our pricing indications by approximately 50 basis points for non-bank senior, unitranche and mezzanine debt.

As expected, the Fed has taken a more active approach to prevent the economy from overheating by tapering its purchases of Treasury bonds and mortgage-backed securities. Specifically, the U.S. Central Bank began tapering in November 2021, scaling back total purchases by $15 billion a month from $120 billion to $105 billion. More recently, the Fed indicated its intention to reduce purchases by $30 billion every month; at this pace, it will no longer be purchasing new assets by mid-2022. Additionally, economists expect the Fed to raise interest rates as many as four times in 2022.

To no surprise, the high yield bond market and publicly traded equity markets sold off in January due to the Fed’s policy shift. Specifically, the S&P fell 10% in January and the Nasdaq composite fell as much as 18.5% from its November high. One would assume that the private credit markets, comprised primarily of non-public, middle market, and illiquid investments, would suffer an even greater adverse impact, but this has decidedly not been the case.

On the contrary, market conditions for many private market issuers have become increasingly more competitive. While formal published data has yet to be compiled, anecdotal information from market participants suggests that for larger middle market issuers completing LBO financings, aggregate leverage multiples of 6x-7x are increasingly more common. Private market credit spreads have also continued to tighten since Q4 2021. According to Direct Lending Deals (“DLD”), increased “competition moved unitranche spreads 25 bps lower in December to an average of L + 540, a monthly low in 2021, despite the stabilizing effect heavy volume in the fourth quarter had on pricing for smaller borrowers and non-unitranche LBO financing. The decline dropped all-in yields to 6.7%, also a monthly low last year.”

For lower middle market issuers, pricing and metrics remain relatively consistent for the month. However, these metrics are already exceptionally aggressive, and as noted in our January Update, constitute “among the most aggressive levels since the inception of the SPP Private Market Update in 2008.” Our published metrics show that senior debt to EBITDA and total debt to EBITDA multiples have expanded by approximately one full turn of EBITDA since January of 2021, while credit spreads have tightened by ~100 basis points for the same period for non-bank senior, unitranche and mezzanine financing.

While it is not particularly clear why private market financing conditions continue to be so competitive while the more traded markets have been in “meltdown” mode, the most probable rationale is a combination of two phenomena; (i) exceptionally light deal flow for the beginning of the year, and (ii) the “surplus” dry powder generated by a proliferation of new capital flowing into the non-bank direct lending community.

According to PitchBook’s Annual Breakdown Report, “2021’s $1.2 trillion performance was more than 50% higher than the previous record.” Deal volume also spiked in Q4 2022, with 8,624 transactions altogether. After such a frenetic and crowded deal calendar in Q4 2021, it is understandable that new year would be begin quietly. Though empirical support for the reduced activity will not be available for a few months, the market has cooled considerably since Q4 2022. SPP’s market review in January suggested that deal flow had dropped off significantly in the new year, with one lender noting that new deal activity is 50%-70% lighter than 2021.

The unprecedented growth and sheer magnitude of new capital raised and available for deployment in the private market continued throughout 2021. Debtwire reported that private debt funds raised ~$195.1 billion last year, of which ~58% was raised for direct lending strategies (amounting to $112.5 billion over 94 funds).

It is unclear how long excess liquidity conditions in the private capital markets will continue while the more efficient traded markets are in decline, but for the time being, there is little doubt that private financing remains decidedly issuer friendly.