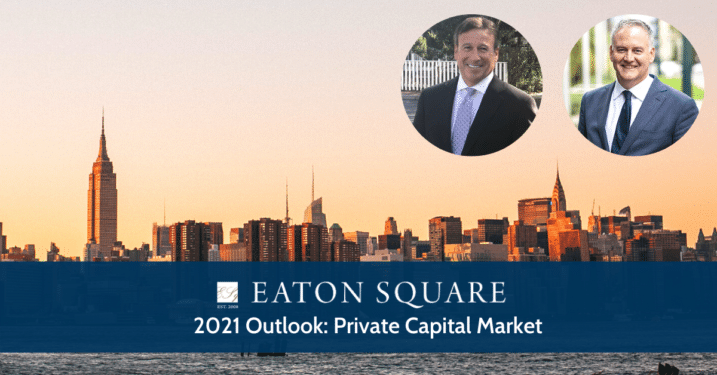 Welcome back to Eaton Square Perspectives. For our premiere episode this 2021, I interviewed Stefan Shaffer, who leads our debt business out of New York. We thought it would be helpful to give you the current state of the Private Capital Market in the US and our forecast for this year. You can watch the full video below.

How would you describe the Private Capital market in the US at the moment?

The market is as good as it’s been in a long time. The Q4 in the private market in the US was a very, very difficult time. It wasn’t because of liquidity constraints, and it necessarily wasn’t because of COVID exclusively.
But there was so much work that COVID deferred deals that should have been done in the
first quarter that got pushed to the second quarter, deals in the second and third
quarter got pushed to the fourth quarter. So, it was a really a mad race to close deals in the fourth quarter.

We go into the new year with all those liquidity conditions which were beneficial but with people
with a lot more time and want to dedicate to the market. At SPP, we’ve lowered pricing pretty much across the board and expanded our leverage tolerances, representing the fact that we think it’s a much more forgiving market for issuers right now.

How would you describe the demographics of the lending community?

What we’re seeing is a continuation of the trend that started several years ago — replacing commercial banks as the primary source of liquidity in the market to the direct lending and private debt funds. Private debt funds have grown from 300 billion in 2010 to 845 billion in 2020 we expect them to go to about
1.4 trillion by 2025.

So much capital has been raised in the private debt asset class that all that money is in the market and creating a bit of disintermediation of the traditional banking relationship. When you disintermediate that banking component of the market, you also disintermediate a part of the subordinated debt market. Often when you achieve a highly leveraged deal four or five times, a bank will be part of that and then you’ll have a sub-debt provider being the other component of it.

With the non-bank lenders, often it’s more of a Unitron product where one lender is providing
the senior and the sub all in one instrument through a Unitron getting leverage up to five times with a single lender.

Does that mean deal structuring is getting more sophisticated for customers?

Asset-based lending ranges from LIBOR 1 to LIBOR 3. Cash flow pricing in the bank market is
LIBOR 3 to sort of LIBOR 4 and a half so it’s still very competitive pricing. The non-bank market direct lending market pricing starts at about LIBOR 5 and it goes up to about LIBOR 9. You’re paying a premium to go into a
direct lender but you know in exchange for that higher pricing you know you’re getting looser covenant packages.

A non-bank lender will go up to 5x now again it will depend on the credit and the nature of the
transaction and pricing will impact that. We’re talking about leverage with a single lender as opposed to a bank which is cut off at three, someone going 5.5x.

Banks are going to require amortization structures which are at most aggressive maybe 4.5% but
usually closer to 7-10% and as high as 15% per annum. A non-bank direct lender leverage amortization begins at 1% and goes to maybe 5%. So, it’s a much easier debt service component to do it.

And then, there’s also ease of execution component with one lender providing 4x terms of capital as opposed to a bank combined with a subordinated debt lender. You don’t need any inter-creditor agreements,  one straight agreement, it’s a little bit quicker and of course, the non-bank community doesn’t have the fed the FDIC and the OCC. So, banks are still a great source of capital and they’re not going anywhere. However, they’re being forced to be a little bit more competitive just because of the amount of capital that’s coming to the direct lending community on a private basis.

With the new US administration, how can you see their new policies and the next round of stimulus impacting lending over the next 12 months?

Well, I think it’s all good news. The most important thing is the Biden administration has noted that it’s looking for a $1.9 trillion stimulus package and that’s going to go a long way for companies that have also been negatively impacted by COVID. There’s going to be a new round of Payroll Protection Program (PPP). I think just spending that’s going to help the market in general.

We’re going to get a GDP for Q4 of 2020. The Atlanta fed is projecting 7.4% and we haven’t seen 7% type growth rates in a long, long time in this country. Even if that’s optimistic, even if it’s something closer to 4.5% – 5.5%, that’s still robust growth. And robust growth in GDP tends to translate into robust growth in EBITDA. Accordingly, higher growth in EBITDA that means more people may think about the M&A market and selling their businesses.

Comparing to the 2008 recession, even though we’ve had a fair amount of breaches and covenant defaults through the COVID period, going into the new year we’re not seeing those translate into bankruptcies. Bankruptcies are less than 25% of what they were during the great recession during that same period.

Everybody’s very optimistic, and that optimism is right now translating into better leverage as they are projecting that EBITDA is going upwards. If they’re foreseeing EBITDA reductions and contractions,they’re going to be a bit more concerned about providing extra leverage. There’s so much capital, there’s a lot of
competition and that competition is going to result in some pricing compression.  All in all, it’s a very, very good time.