The Private Market Is Hot, but Is It Too Hot? 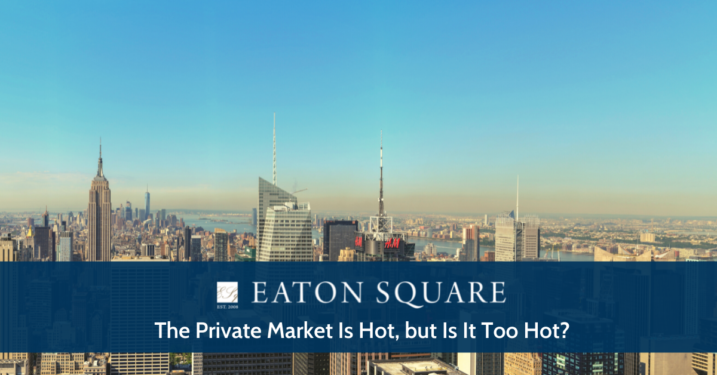 Stefan Shaffer, our New York Partner shares the May 2021 Private Capital Report. Generally, market conditions are identical to where they were in April. The Private Market is hot but is it a little too hot? There is also some new “heat” in the market, but decidedly, not the kind that improves liquidity conditions. Read the full report below.

May 2021 market conditions continue to push the limits on maximum liquidity. The now “post-pandemic” struggle for assets has tightened credit spreads to their most aggressive levels in recent memory, while the same competitive dynamics continue to expand leverage multiples, especially for larger middle market issuers. The metrics delineated in this month’s Market-At-A-Glance are at their most aggressive levels since we started tracking data in 2011.

As the non-bank direct lending market builds to the trillion-dollar AUM level, traditional middle-market players such as commercial banks, BDCs, and insurance companies are being forced to keep spreads tight and leverage multiples loose for issuers up and down the credit spectrum. The looming question on many market participants minds is what impact inflation may have on a market that has had the gorged itself on low-cost capital for the last 10 years.

The Private Market Is Hot

There is little doubt in anyone’s mind that the private market is hot, but is it too hot?

Though we made some minor tweaks to pricing and leverage for the month of May (specifically, increasing leverage multiples for $20 million+ EBITDA issuers by a quarter to a half turn, and reducing pricing for the same cohort by 50 basis points), generally market conditions are identical to where they were in April.

In just about every metric possible, this is an extremely overheated market:

There is also some new “heat” in the market, but decidedly, not the kind that improves liquidity conditions.  The inflation data in April took many by surprise; consumer prices (as evidenced in the April Consumer Price Index, or “CPI”) rose by its fastest pace in 10 years, jumping up 0.8% following a similarly robust 0.6% in March. On an annual basis, that is 4.2% boost to CPI (over the last three months, prices actually rose at a 7.2% annual rate).

A jump in CPI alone, however, is not earth shattering, in large part because it is usually the product of activity in the more volatile sectors of the economy, specifically food and energy costs. The bump in CPI in April, though, was primarily attributed to “Core CPI”—which specifically excludes food and energy costs. Core CPI rose 0.9% in April, its largest monthly gain since 1982, and annually, Core CPI is up 3% year over year.  Higher prices for used autos surged 10% in April, their largest monthly increase on record.

While the most recent pronouncements of the Fed suggest this most recent inflation surge was “transitory,” resulting from the “re-opening of the economy” and that it will “likely moderate in coming months,” almost nobody predicted the magnitude of the April CPI gains (expectation was less than 0.4% vs. the actual 0.8% recorded for the month).  However, recent data suggests that even a “transitory” increase in prices could have a deleterious impact on market conditions. Already, the April retail sales surprised to the downside, suggesting that U.S. consumers are beginning to balk at higher prices (the Commerce reported on May 14 that Retail Sales were unchanged following a 10.7% surge in March; expectation was for a 1.0% April increase). Additionally, the University of Michigan consumer sentiment index slumped in May, coming in well below market consensus. The Index registered 82.8, down from 88.3 in April, a rather sobering decline of -6.2%.  According to the official University of Michigan report, “Consumer confidence in early May tumbled due to higher inflation—the highest expected year-ahead inflation rate as well as the highest long term inflation rate in the past decade.”

If the most recent surge in inflation is not transitory, the Fed will have no choice but to increase rates, which will result in a chilling effect on private market activity from higher borrowing costs and the potential for higher default rates for highly indebted companies. Higher capital costs translate to less leverage, and less leverage translates to lower valuations. The consequence of lower valuations historically results in depressed M&A activity, and the cycle continues.

Yes, we have a very hot market, but if the underlying economy may be even hotter, and that might prove to be … Too Hot.