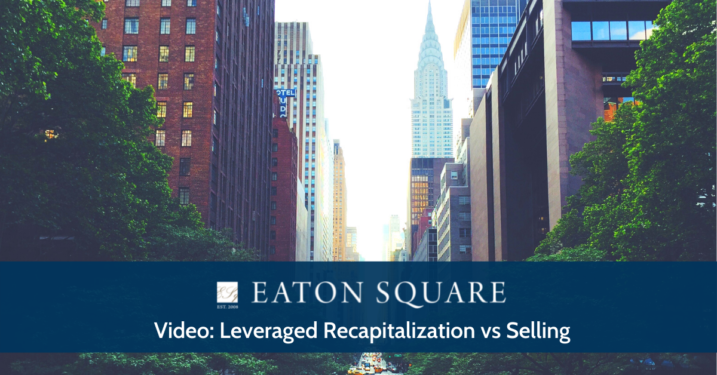 In this latest Eaton Square Perspectives, Peter Hall talks to Stefan Shaffer, our debt expert from New York about leveraged recapitalization as an alternative to selling. They discussed when a company might find this useful and what factors should a business owner consider when contemplating an outright sale of the business or a leveraged recap.

Watch the full video below

What is leveraged recapitalization and why would a company need it?

This means getting some benefit of leverage really for purposes of a dividend and that could be an equity purchase of a minority partner. This would be a share recap or share recapitalization or a simple leverage recapitalization which would simply be a dividend to the owner. It’s a way or another option that an owner has of realizing some liquidity without necessarily selling the business or losing control of the business.

Are there scenarios you see where this process may be particularly useful?

There are a lot of people who lived through COVID and saw the values of their business drop and got concerned. Can we weather another one where ultimately a sale of a private business is probably in the cards to these guys over time. But right now they want to sort of hedge their bets a little bit, maybe take some money off the table while they can have a little bit of debt as opposed to an outright sale. They want to rebuild that business but they don’t want to have 100% of their equity in the business but perhaps have a bit of the business for estate planning purposes but still want to grow and build the business.

Is leveraged recapitalization an opportunity for businesses to create value by using debt rather than equity capital?

Most leverages recaps when we do them result in the owner owning 100% of the business after the transaction. A typical example would be a company that has $5m or $10m in EBITDA, no debt, not a particularly unique company maybe a manufacturing business. It’s not software, it’s not a brand name things that would drive a significant value. That owner could sell the business for roughly five and a half times just to use a throw multiple out five and a half times. Its EBITDA is $55m on a $10m EBITDA business at the end of the day.

Under most strategies, what would happen is they would be asked to redeploy roughly 20% of their proceeds so that $55m that they were receiving, approximately $13.75m or 20% would be redeployed in the business. That would leave the owner $41.25m in cash proceeds and when he leaves, he would own 25% of the business.

Now let’s take that exact same company and talk about a leveraged recapitalization. $10m of EBITDA we could probably leverage that company four times so the owner would take out $40m. They would still own a 100% of the business and they could grow it and then resell it at a later date. So, it’s an exceedingly compelling opportunity for somebody who wants to grow that business not necessarily ready to exceed control. When you sell a lot of these businesses, they’re going to be leveraged anyway. Ultimately, the question becomes who gets the benefit of that leverage in the sale process where you can see what the owner has to redeploy and he only has a minority position. The new owner is getting the benefit of that four times leverage that they would raise in the market. In this case, under a leverage recapitalization the owner is getting the benefit of that leverage and that’s the real key distinction here.

Given that the interest rates are historically quite low, is this the best time to do a leveraged recap?

Exactly! Clearly a benefit of doing it in the low-interest rate environment if you’re dealing with leveraging who’s taking the risk as well as getting the benefit of leverage. There are a lot of entrepreneurs out there who know ultimately a sale process is going to be appropriate. It’s going to be in the cards but they’re not necessarily ready to do it yet but they do want to preserve some value well leverage recap is a way of getting a lot of the way there and setting yourself up for a future sale.

What factors should a business owner consider when thinking about whether they should undergo a leveraged recapitalization or undertake an outright sale?

It’s a very personal decision first and foremost. Whether somebody wants to sell the business and exit and do something else. If somebody really does want to build a business and maybe is seeking some capital or seeking a partner strategically who wants to join them to create value in the future, the idea is that you can get the benefit of some of that liquidity today but really build something in the future so that’s the key the key issue.

The other concerns however are going to be from an investor’s perspective. What is the value left if somebody’s taking a significant piece of value off the table but they’re not selling the business. The question is are they still going to be motivated to work the company and grow the business under the new capitalization. In most cases, specifically in a leveraged recapitalization of course because they’re getting 100 now they’re going to own 100 of that after the transaction. So they’re more than motivated to continue to work the transaction and I think investors like to see that. In some cases, a debt provider may say I want to go forward, I want to do this deal. But you know rather than just being a debt player I want to share in that upside with you and they may want to invest a little bit of common equity in the difference in that scenario. However, it’s going to be a minority interest, not a controlling interest so that the entrepreneur still gets the benefit of majority ownership if not 100 ownership and the benefit of that liquidity.

What are you seeing in the markets at the moment in terms of interest in undertaking leveraged recapitalizations?

It’s an exceedingly liquid market and it has been all year. There is just a lot of capital out there. The banks, unlike the recession where banks had a lot of toxic assets and after the problems associated with the recession really were much more liquid than they are today are doing quite well. They don’t have any of these assets on their balance sheet.

The truth of the matter is it’s probably never been healthier than they are today. The non-bank market, another constituency that lends to these types of transactions again is very, very liquid. It’s close to a trillion-dollar assets under management. It’s a massive market insurance companies credit funds business development companies. They’re all very comfortable with these transactions and so there’s probably not been a time as liquid as it is now. There are some players who will be concerned about a non-sponsored transaction where the liquidity is going out but I think they’re a minority, I think most investors.

What factors should business owners keep in mind when undergoing a leveraged recapitalization?

We mentioned earlier the biggest concern is going to be what they want to do. Do they want to sell the business and lose control and go on to something else or do they want to stay with the business?  Once you’ve made that decision and if it involves staying in the business, then I think you have to look very seriously at what are all the benefits both economic control and everything else. When it comes to a transaction, I think that in the final analysis, a lot of people will look at a leveraged recapitalization and say it really accomplishes a lot of what I need to do right now but ultimately may not give me everything in a sale process but I can always do that in a couple of years from now.