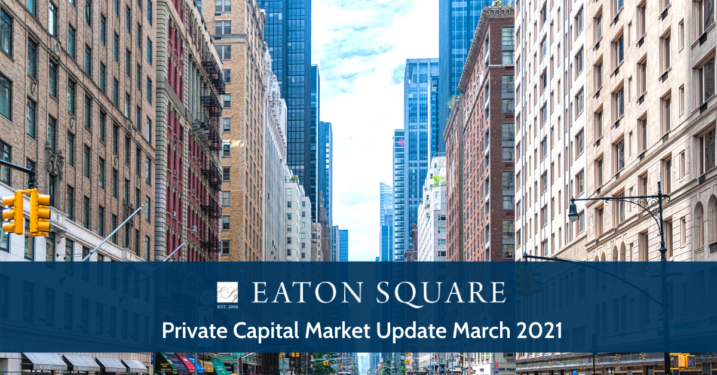 Our New York Partner, Stefan Shaffer, shares the state of the Private Capital Market as of March 2021. Overall, market conditions have returned to their pre-pandemic levels. In the last month, their SPP-sponsored offerings have achieved record oversubscription rates ranging from 12x-15x for the most sought-after transactions. Read the full report below.

“This is clearly an issuers’ market for the foreseeable future; or stated another way, we are back in the high life again.”

The cumulative effect of record fundraising in the direct lending market, improving macroeconomic reports (unemployment, GDP, manufacturing, retail sales all surprisingly strong), a new $1.9 trillion round of economic stimulus, and the “green shoots” of a post-COVID economy have coalesced to create an exceedingly robust and liquid issuance environment. Across the board, market conditions have not only returned to their pre-pandemic levels but, in some cases, have settled into among their most aggressive metrics since 2018. To attract issuers, commercial banks are routinely waiving LIBOR floors as well as upfront fees. Not to be outdone, non-bank direct lenders are selectively eliminating prepayment premiums and extending their most aggressive spreads to lower middle market issuers (sub-$10 million EBITDA). In the last month, SPP-sponsored offerings have achieved record oversubscription rates ranging from 12x-15x for the most sought-after transactions, and routinely 3x-5x oversubscription levels for more “storied” and challenged credits. While the chorus of commercial bank and non-bank direct lenders bemoaning current market metrics continues to rise, issuers are reaping the benefits of a lending community undoubtedly in “risk-off” mode.

State of Private Market in March 2021

For the third consecutive month in 2021, SPP is lowering its spread indications and increasing its leverage multiples for middle market companies in the U.S. private market. Most of the changes this month respecting indicative pricing and leverage are more tweaks than dramatic market moves, but they are not insignificant; specifically, lowering senior cash flow, unitranche, and second lien pricing by approximately 50 basis points across the board and expanding leverage multiples for lower middle market issuers by a half turn. The changes not only a signal a definitive return to pre-pandemic pricing and leverage metrics, but, more significantly, move the middle market lending environment to among its most aggressive levels since 2018.

Importantly, while the March modifications to pricing and leverage multiples are among the most visible indications of an increasingly competitive lending landscape for lenders, they are by no means the only indications of a more liquid and aggressive lending environment. SPP’s anecdotal experience illustrates that lenders are being forced to compete on terms and conditions that impact every transaction metric. For instance, on prepayment protection, non-bank lenders usually command an initial prepayment minimum premium of 102, then stepping down to 101, and then par in the third year. However, recent transaction experience has demonstrated a willingness of non-bank lenders to waive all prepayment premiums under certain circumstances. LIBOR floors, which have been a mainstay of the private market for the last two years, are in large part disappearing for commercial bank deals and have recently declined from 2.0% in Q4 2020 to 1.0% in Q1 2021 for non-bank lenders. Commercial banks are also willing to drop all closing fees in select cases to attract borrowers, and the use of expanded definitions of “adjusted” EBITDA are becoming increasingly common across lending constituencies for the first time in the last 18 months.

While the emergence from the overhang of COVID-19 is certainly impacting the increased competition in the market, there are also much more secular influences at play. As noted frequently in SPP Market Updates, the magnitude and liquidity of the non-bank direct lending community is the single most significant driver of the enhanced liquidity in the market. Preqin, a leading source of data & intelligence for the alternative assets industry, estimates private debt assets under management exceed $900 billion, and private debt is now the third largest asset class in private capital (of which approximately 60% are based in North America). Recent data suggests that this phenomenon will only increase in the future; respecting investors in the asset class surveyed by Preqin, 83% said their private debt portfolios had exceeded or met performance expectations, and 88% expected to maintain or increase their allocations in private debt.

It would be premature, however, to count out commercial banks and their impact on the current market. Unlike the Great Recession where the FED, OCC, and FDIC, tightened bank leverage lending standards to shore up the banking system, banks emerging from COVID are in significantly better shape. Loan loss provisions among the major banks are roughly in line with where they stood in 2007, right before the Great Recession, arguably among the most aggressive bank lending markets of all time. This translates to enhanced balance sheet capacity.

While fear of increased bankruptcies during the pandemic had a sobering influence on leveraged lending last year, that concern has in large part dissipated: U.S. corporate bankruptcy filings currently stand at near record low levels (dating all the way back to 2006). Importantly, and consistent with the euphoria feeding the private market in March, most of the recent macroeconomic reports are surprising to the upside as well, providing increased comfort to lenders looking to stretch their credit standards to attract new assets. As discussed in greater detail below, the February Employment Situation Report, the Consumer Sentiment Survey, average hourly earnings, the ISM Manufacturing and Services Survey, and construction spending all support the proposition that macroeconomic conditions should be stable in the short term. Finally, the additional $1.9 trillion in stimulus payments will continue to foster economic activity, as much of those proceeds will find their way directly back into the economy through increased consumer spending.

Taken in the aggregate, this is clearly an issuers’ market for the foreseeable future; or stated another way, we are “Back in the High Life Again.”