2022: The Year of Recapitalizations? 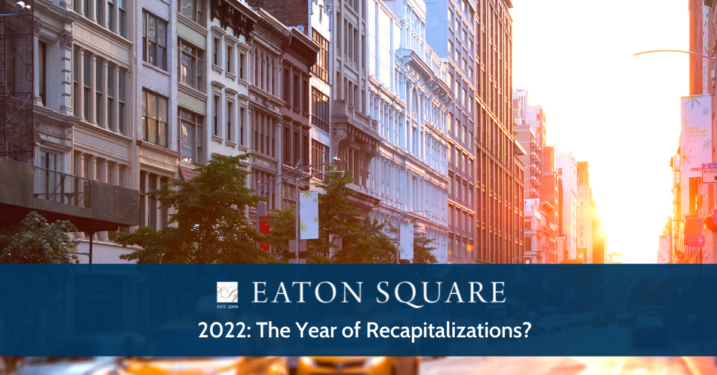 Stefan Shaffer, our New York Partner, shares the latest Private Capital Report for March 2022. While economic resurgence drove the M&A activity in 2021, what we foresee this year is an upward trend in debt recapitalizations. Read the full report below.

Economic resurgence paved the way for record M&A activity in the U.S. during 2021. North American aggregate deal value hit approximately $2.8 trillion, a 55% increase from the $1.9 trillion logged in 2020. In fact, U.S. deal flow accounted for approximately 60% of all global deals. Deal volume also surged last year, recording a new all-time high of 7,896 transactions. While most expected that 2022 would follow the trends established in 2021, SPP anecdotal feedback suggests a precipitous reduction in M&A activity and a corresponding increase in debt recapitalization transactions.

Market Volatility at Its Highest Level

Conventional wisdom argues that recapitalization activity peaks at the height of a business cycle, especially when volatility is elevated. A recapitalization is often a perfect hedge that allows financial sponsors to take money off the table and distribute capital to their investors on an expedited basis, rather than undertaking a lengthy, and at times, uncertain, sales process. While inflationary concerns certainly influenced the capital markets in January and February, the invasion of Ukraine has only exacerbated current market conditions, driving volatility to its highest level in years.

The Chicago Board Options Exchange’s CBOE Volatility Index (“VIX”) is a popular measure of the stock market’s expectation for volatility based on S&P 500 index options. It is calculated and disseminated on a real-time basis by the CBOE and is often referred to as the “fear index” or “fear gauge.” Relative to history, the VIX is now around the 88th percentile. In other words, it’s only been historically higher 12% of the time. Many capital markets experts are dialing back U.S. GDP growth resulting from the combination of higher interest rates, soaring energy prices, and geopolitical instability. Goldman Sachs has cut its forecasted gross domestic product growth for the United States to 1.75% this year after previously forecasting a 2.00% increase in GDP. According to Goldman Sachs chief economist, Jan Hatzius, “We now see the risk that the U.S. enters a recession during the next year as broadly in line with the 20-35% odds currently implied by models based on the slope of the yield curve.”

Pricing and Leverage Multiples at Their Most Aggressive Levels

Not surprising against this backdrop, SPP’s anecdotal experience is that debt recapitalization transactions have surged in the last month, for both sponsored and unsponsored issuers. Fortuitously, the spike in recapitalizations also comes at a time when pricing and leverage multiples are at their most aggressive levels. We are not making any changes to last month’s metrics in March.

While it will be a few months before the empirical data tracking recapitalization activity will be generated, in light of the increasing current economic volatility, geopolitical instability, and anticipated Fed interest rate hikes, there is little argument that for any issuer contemplating a liquidity event, a thoughtful debt recapitalization strategy warrants serious consideration. Stated more succinctly, Get It ‘Fore It’s Gone.

SPP is not making any changes to its leverage multiple or credit spread indications for the month of March. However, the fact that these metrics are static for the time being is, quite noteworthy. First, our leverage and pricing metrics are already at historically aggressive levels and remain at their lowest since the inception of the SPP Private Market Update in 2008. Second, and perhaps more extraordinarily, these metrics remain unchanged amongst significant economic and geopolitical volatility: (i) inflation remains elevated and sits at its highest point in 40 years with the consumer price index (“CPI”) at 7.9%, (+0.8% in February) and Core PCE, the Fed’s preferred measure of inflation, at its highest since January 1982 (6.4% annualized); (ii) U.S. Crude oil is at its highest level in more than a decade with the global benchmark topping $113 per barrel; (iii) the Fed continues to par down asset purchases and is expected to raise the Federal Funds Rate 0.25% in March; and (iv) Russia’s invasion into the Ukraine has destabilized world markets, bringing nuclear tensions to their highest levels since the Cold War. These events have wreaked havoc on the equity and debt markets and pushed credit spreads between investment grade and high yield bonds up to their highest levels since July. While it is almost inconceivable that the recent political and economic events will not have an adverse impact on the private market at some point, issuance conditions remain solidly issuer friendly for the time being.